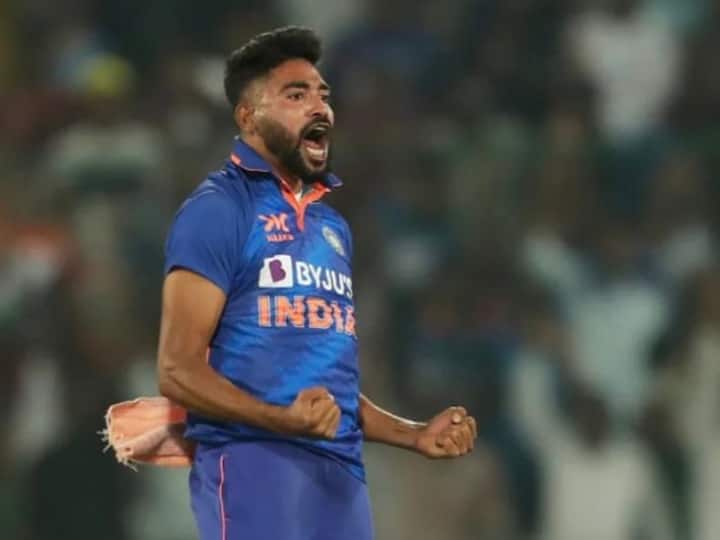 Mohammed Siraj: The first ODI match between India and New Zealand was played in Hyderabad. In this match, Team India won by 12 runs. Batting first, the Indian team scored 349 runs at the loss of 8 wickets in 50 overs. The New Zealand team, which came out to chase the runs, appeared to be faltering in the beginning, but after the fall of 6 wickets, number seven batsmen Michael Bracewell and Mitchell Santner almost pulled the match into their camp. But in the 45th over, Mohammed Siraj turned the tide of the match by dismissing Mitchell Centre. After India’s victory, Siraj’s mother reacted to her son’s performance.

Santner played an inning of 57 runs in 45 balls. The Kiwi team had lost its 7th wicket in the form of Santner. On its very next ball, Siraj bowled Henry Shipley. These two consecutive wickets of Siraj brought the match back to the Indian camp. Siraj was playing the first international match at his home ground Hyderabad. His mother, family and many friends came to watch this match. After this match, his mother expressed her wish that her son should play the 2023 World Cup.

My son should play the World Cup: Siraj’s mother

Mohammed Siraj’s mother, seeing his performance in this match, said, ” Siraj should make India proud. May his performance be good. He goes further. He should also play the World Cup.” In the first ODI against New Zealand, Siraj took 4 wickets in 10 overs with an economy of 4.60. During this, he also threw 2 maiden overs.

Significantly, the Indian team will play its next ODI against New Zealand in Raipur on Saturday, January 21. This match will be played at Shaheed Veer Narayan Singh International Stadium. The match will start at 1:30 pm.