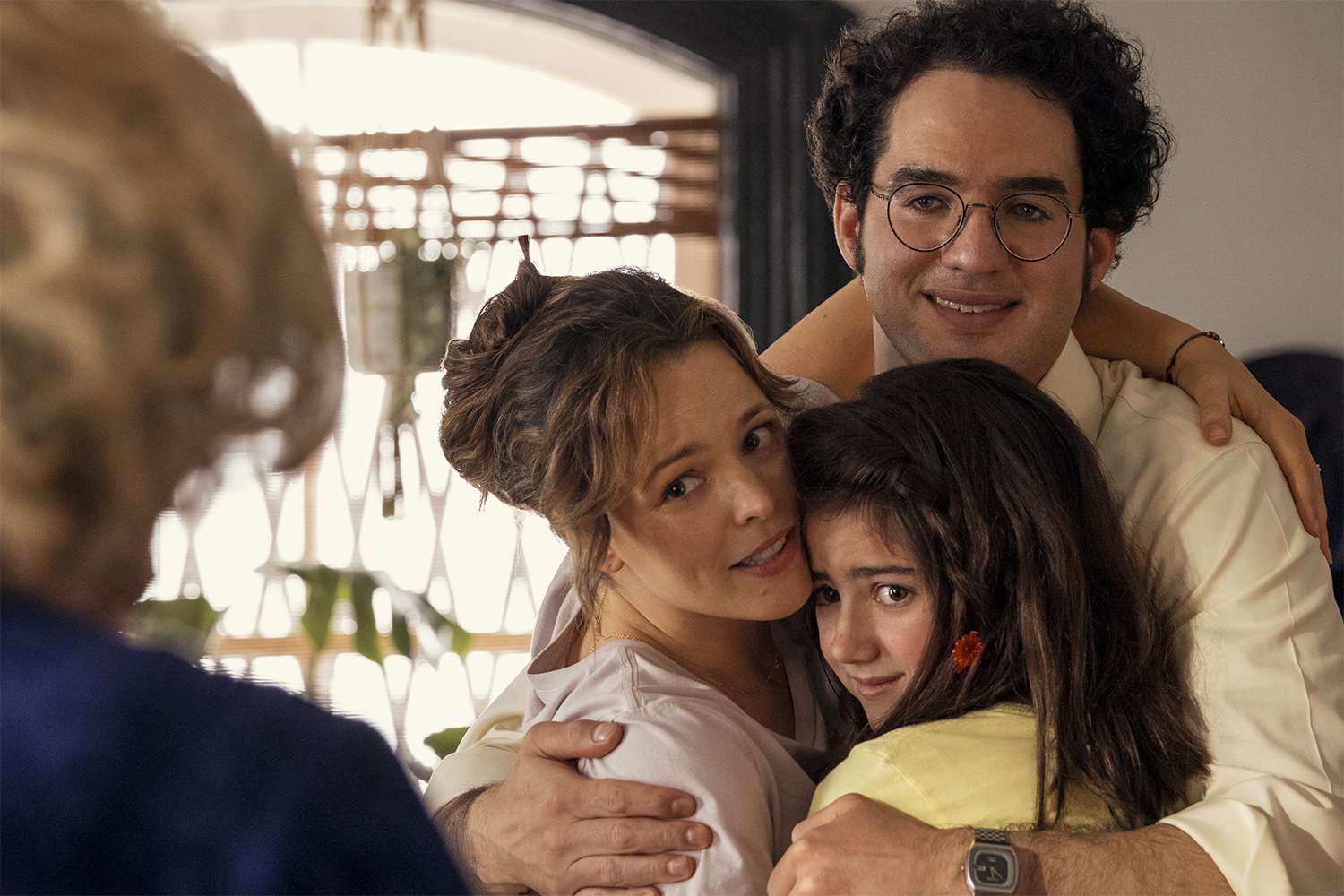 Are You There God? It’s Me, Margaret

On Jan. 10, teens (and former teens) everywhere rejoiced when it was announced that Judy Blume’s 1970 classic Are You There God? It’s Me, Margaret is being adapted into a film.

Abby Ryder Fortson stars as the titular 11-year-old who is “going through the messy and tumultuous throes of puberty with new friends in a new school,” according to a synopsis, after her family picks up and moves from New York City.

How to watch: The movie is set to hit theaters on April 28


The Sun Is Also a Star

This 2019 film based on th ebook by Nicola Yoon tells the story of Natasha, played by Yara Shahidi, who falls in love with Charles Melton’s Daniel in a single day after he saves her life on a New York City street — despite declaring she doesn’t believe in love in the first place. While the story is certainly one of romance, the leads are facing challenges in their personal lives: Daniel is conflicted about his parents’ dreams for him and how they compare to his own, while Natasha is fighting against her family’s impending deportation to Jamaica.


To All the Boys I’ve Loved Before

In the first adaptation of Jenny Han’s three-part series, To All the Boys I’ve Loved Before tells the story of what happens when one girl’s secret childhood love letters are mailed out. That’s right, the letters Lara Jean, played by Lana Condor, once wrote are mailed to multiple boys from her past including her sister’s now ex-boyfriend, Josh, and classmate Peter.

After being embarrassingly confronted by Peter, played by Noah Centineo, the two come up with a plan to A. make Peter’s ex-girlfriend jealous and B. throw Josh off any scent of Lara Jean’s affection. What follows is a fake-turned-real relationship and over an hour-and-a-half of adorable, sometimes cringe-worthy, moments.

How to watch: Available to stream on Netflix


The Hate U Give

In 2018’s The Hate U Give, based on Angie Thomas’ novel by the same name, high schooler Starr witnesses her childhood friend, Khalil, get shot and killed by police during a traffic stop.

Starr, who feels pulled between her wealthy, mostly-White prep school and her own community, is played by Amandla Stenberg, and she shares her journey of grief and how she rallies to fight for justice for Khalil.


Simon vs. The Homo Sapiens Agenda

2018’s Love, Simon stars Nick Robinson as the titular character — a teen who struggles to tell those close to him that he’s gay. In addition to Robinson, the film stars Jennifer Garner, Josh Duhamel, 13 Reasons Why‘s Katherine Langford, Alexandra Shipp and Jorge Lendeborg Jr., who help tell the heartwarming coming-of-age-story first written as Simon vs. The Homo Sapiens Agenda by Becky Albertalli.

The Miseducation of Cameron Post, starring Chloë Grace Mortez as the titular character, tells the story of a teenager who is sent to conversion therapy camp by her guardian. While there, Cameron befriends Jane, played by Conversations with Friends‘ Sasha Lane, and Adam, played by Forrest Goodluck, who against all odds find a way out. The original book, by Emily M. Danforth, came out in 2012.

How to watch: Available to stream on Peacock and Hulu

In another Nicola Yoon adaptation, 2017’s Everything, Everything is a unique star-crossed lovers tale that sees Amandla Stenberg’s Maddy, who’s told she must stay confined to her home due to a rare disease, fall for her new next-door neighbor Olly, played by Nick Robinson. The story shows the teen couple’s relationship evolve from messaging to secretly meeting up in person, and Maddy learning the truth about why she’s been inside all these years.


Me and Earl and the Dying Girl

Greg, played by Thomas Mann, is a high school senior who likes to fly under the radar and spends his free time hanging out with his “coworker” Earl, RJ Cyler, recreating classic movies into parodies. His life turns around, though, when his parents tell him a childhood friend, Olivia Cooke’s Rachel, has been diagnosed with cancer, and push him to spend time with her. What follows is a touching story of three unsuspecting friends adapted from Jesse Andrews’ 2012 novel.

How to watch: Available to stream on Disney+

Cara Delevingne and Nat Wolff star in Paper Towns as Quentin “Q” Jacobsen and Margo Roth Spiegelman. After Margo, Q’s neighbor and childhood crush, appears in his window one night and asks him to join her in her plan to get back at a group of kids in their high school, she goes missing. What follows is Q’s journey to find her by following clues she’s left behind. Famed YA author John Green penned the original in 2008.


The Fault in Our Stars

John Green’s original film adaptation, 2014’s The Fault in Our Stars, is sure to bring a tear (or many) to your eyes! This heart-wrenching tale of two teens who meet in a cancer support group — and fall in love — was adapted from the 2012 book of the same name. It stars Shailene Woodley as 16-year-old headstrong Hazel Grace Lancaster and Ansel Elgort as dark-humored Augustus Waters.

How to watch: Available to stream on HBO Max.

In this 2014 film based on the first book Veronica Roth’s Divergent series, Shailene Woodley plays 16-year-old Beatrice Prior — or Tris —in a dystopian, future city divided into five factions. At her selection ceremony, though, she learns that she is a Divergent, meaning she doesn’t belong to any faction — a fact she must keep secret. Woodley is joined by both her The Fault in Our Stars costar Ansel Elgort and her The Spectacular Now costar Miles Teller. Much of the movie, though, sees her starring opposite White Lotus‘ Theo James as Four — her instructor.

How to watch: Available to stream on HBO Max

The Spectacular Now tells the story of just what happens when opposites attract. It stars Miles Teller as Sutter and Shailene Woodley as Aimee, two teens who fall for each other despite their differences. They first meet one morning after Sutter, who spent the night drinking, falls asleep on a lawn and is found by Aimee as she’s completing her mother’s paper route. The two relate over their difficult upbringings and face their ups-and-downs in their own relationship. The 2013 film, adapted from the 2008 Tim Tharp novel, closes with a cliff-hanger ending that leaves audiences wondering what happens after the credits roll.

How to watch: Available to stream on HBO Max


The Perks of Being a Wallflower

2012’s The Perks of Being a Wallflower follows the story of Charlie, played by Logan Lerman, a socially awkward teen dealing with depression who carries around a deep, dark secret. When he befriends Emma Watson’s Sam and her stepbrother Patrick, played by Ezra Miller, his world opens up. Another film sure to bring out the tissue box, this heartwarming (and heartbreaking) tale is based on the 1999 book by Stephen Chbosky, who wrote and directed the film.

In 2012, Suzanne Collins’ Hunger Games was brought to the big screen starring Jennifer Lawrence, Liam Hemsworth, Josh Hutcherson, Elizabeth Banks — to name a few. The all-star cast tells Collins’ story of Panem, a fictional, futuristic place where youth are chosen from each of the nation’s districts to compete — to the death — in a televised competition. Lawrence’s Katniss Everdeen volunteers “as tribute” in place of her younger sister, which begins a journey that lasts two subsequent books — and movies. A prequel novel is being adapted for the screen in 2023.

A love triangle, vampires and werewolves, oh my! The global phenomenon that is the Twilight franchise all began with Stephanie Meyer’s series, which first hit shelves in 2005. The first book, Twilight, was made into a film in 2008 starring Kristen Stewart as shy, new girl in town Bella Swan and Robert Pattinson as Edward Cullen — a vampire. The first iteration of what became a four-part movie franchise chronicles the beginning of a love story for the ages.

Where to watch: Available to stream on Showtime


The Sisterhood of the Traveling Pants

The Sisterhood of the Traveling Pants, originally written by Ann Brashares in 2001, was adapted for the screen in 2005. The story follows four best friends as they set off for transformative summers apart and use a pair of jeans — that miraculously fits each of them — as a way to stay connected. Starring America Ferrera, Alexis Bledel, Amber Tamblyn and Blake Lively, the film was followed by a sequel based on Brashare’s second book in the three-part series.

In 2001, The Princess Diaries launched the career of Anne Hathaway, who plays Mia Thermopolis — a teen who learns, from non other Julie Andrew’s Queen Clarisse Rinaldi — that she is in fact a princess. The adorably quirky film follows Mia’s journey from awkward high school student to the poised Prin-cess of Genovia. A second film followed in 2004 and in November 2022 it was announced that a third film is in development, also based on the book series by Meg Cabot.

How to watch: Available to stream on Disney+