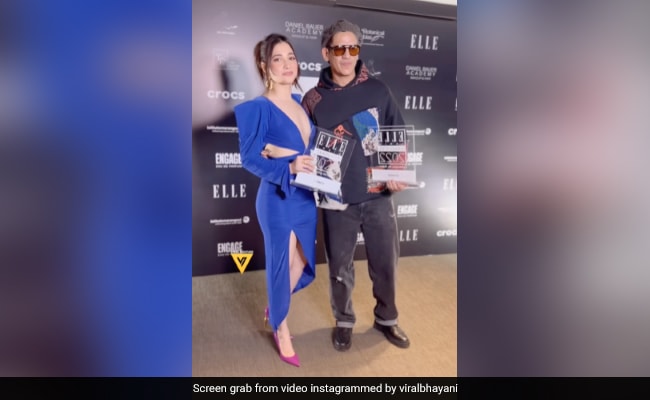 Tamannaah and Vijay seen together at the award show

In the past, Tamannaah Bhatia and Vijay Verma came out from the airport one after the other and remained in discussion. At the same time, seeing both of them posing together in an event, the fans are accepting their relationship as true. Actually, celebrity photographer Viral Bhayani has shared a video on Instagram, in which Tamannaah Bhatia and Vijay Verma are seen together at the ELLE Graduates 2022 Award Show. In the video, the actress is seen dressed in a beautiful blue dress while Vijay Verma is seen wearing a sweatshirt and denim jeans.

fans are saying so

After the video went viral, fans are also seen commenting. One user wrote, Vijay Verma is commendable. He has made a name for himself. Another user wrote, both are looking very cute together.

Let me tell you, Tamannaah Bhatia was last seen in Babli Bouncer, which was liked by the fans a lot. On the other hand, Vijay Verma had won the hearts of the fans with his excellent acting in the film Darlings. There are reports that both are going to be seen together in Lust Stories 2, due to which the fans are quite excited.