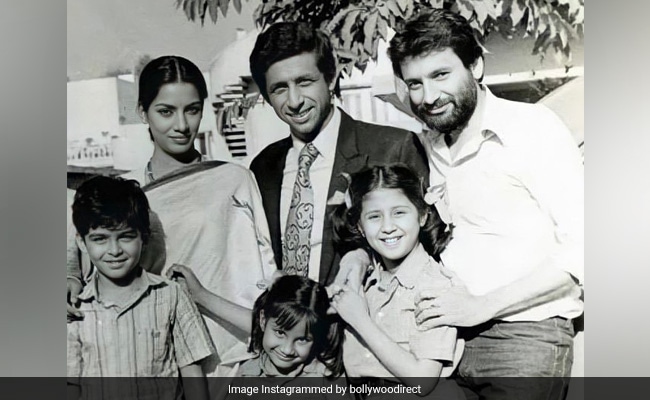 Celeb Childhood Photo: This girl seen in the photo is Bollywood’s top actress. This actress has been the heroine of all the big stars in her time. This girl has worked with big stars like Naseeruddin Shah and Shabana Azmi in her childhood. Yes, the girl was seen in the innocent film with these big stars. In this film, people were convinced of the cuteness and acting of this girl. Later this girl grew up and appeared in many hit films.

If you have not recognized this girl till now, then tell that this is the childhood photo of Urmila Matondkar, who was Bollywood’s top actress at one time. He worked not only in Hindi films but also in Malayalam, Marathi, Tamil and Telugu films. Urmila Matondkar ‘Masoom’, ‘Narasimha’, ‘Rangeela’, ‘Indian’, ‘Judai’, ‘Satya’, ‘Khoobsurat’, ‘Jungle’, ‘Pyaar Tune Kya Kiya’, ‘Bhoot’, ‘Pinjra’, She was seen in big hit films like ‘Ek Hasina Thi’, ‘Karz’, ‘Deewana’, ‘Janam Samjha Karo’, ‘Money Money’, ‘Bade Ghar Ki Beti’, ‘Drohi’.

Urmila Matondkar was born on 04 February 1974 in a Marathi family in Mumbai, Maharashtra. Urmila completed her schooling from Mumbai only. After this, he has graduated in Philosophy from Pune University. Urmila was interested in acting since childhood. Urmila made her debut in Hindi films in 1981. The name of his first Hindi film was ‘Kalyug’ which was directed by ‘Shyam Benegal’. Urmila was in the role of ‘Parikshit’ in this film. The film was a hit. In the year 1983, Urmila appeared in ‘Masoom’. Shekhar Kapur was the director of the film. Urmila was in the role of Pinky in this. Naseeruddin Shah, Shabana Azmi, Jugal Hansraj and Urmila Matondkar were in lead roles. This film was also a hit.

Urmila was young till 1991 and appeared in the lead role in the film ‘Narasimha’. The director of the film ‘N. Chandra’ Sunny Deol and Amrish Puri were also in this film. After this film, he did not look back. She went on signing films one after the other and her films became hits. Urmila married Mohsin in 2016. She is living her family life and she is also a leader now.