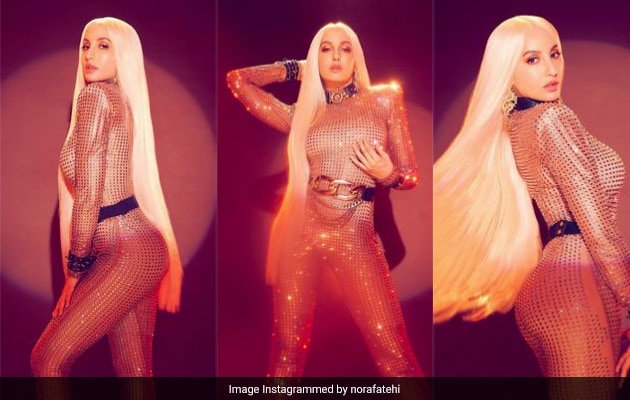 show nora’s charming style
Shortly before, Nora shared some photos of her new style on Insta, which created a stir on social media. In these pictures, Nora is seen wreaking havoc in long golden hair. It is clear that these pictures are from Nora’s photoshoot, but the fans are surprised to see Nora’s blonde look. People are wondering where did Nora get such long blonde hair. Talking about Nora’s looks, in this shoot, Nora is wearing a sizzling shimmery body suit, with which Nora has carried black colored high boots. In this fit shape body suit, the black colored designer belt tied on the waist is adding charm to Nora’s look. In the picture, Nora is seen flaunting her curvy figure and fans are going crazy about this look of their favorite actress.

fans are going crazy
This post has got more than 2.5 lakh likes in just half an hour. On the other hand, Nora’s fans are commenting on her amazing look. One user has written – Cardi Fatehi. At the same time, a user has called Nora an angel. One user called Nora Lady Gaga and the other user said that don’t show like this, heart failure can happen. However, these pictures of Nora show that the actress knows very well how to win the hearts of her fans. Her killer fashion sense and style is always in the news on social media.