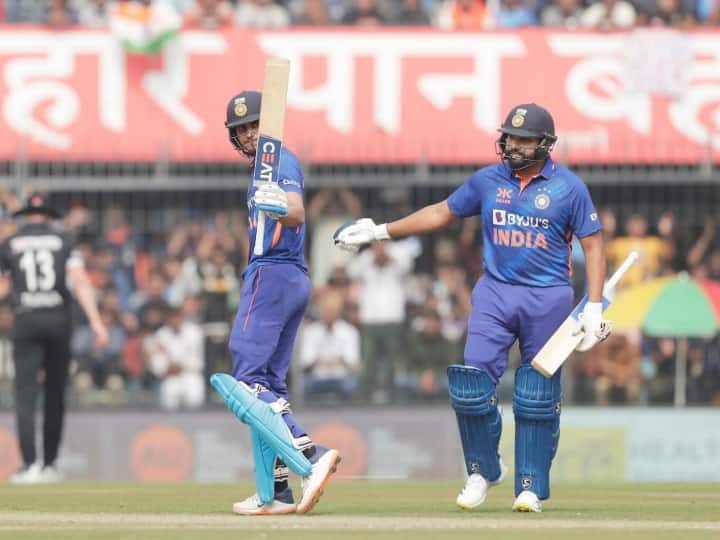 <पी शैली ="टेक्स्ट-एलाइन: जस्टिफ़ाई करें;">IND vs NZ 3rd ODI: The last match of the ODI series between India and New Zealand (IND vs NZ) was played on 24 January in Indore. Team India defeated the guests by 90 runs in this match. India was successful in winning the ODI series 3-0. This is the third time when Team India made a clean sweep of the Kiwis in the ODI series on their own land. Indian batsmen also made a special record in this match played at Holkar Stadium. This happened for the first time in India’s ODI history when the top 6 batsmen of the team were successful in hitting sixes. Earlier, India’s top five batsmen had hit sixes in an ODI match.

Top-6 batsmen hit sixes
Team India’s top-6 batsmen hit sixes in the third and final ODI played at Holkar Stadium, Indore on January 24. Rohit Sharma hit 6 sixes during his century innings of 101 runs. At the same time, Shubman Gill hit 5 sixes in his innings of 112 runs. Apart from these two batsmen, Virat Kohli hit one, Ishaan Kishan one, Suryakumar Yadav two and Hardik Pandya hit three sixes. In this way, all the top six players of India hit at least one six in the match.

What was the previous record?
Earlier, on June 4, 2017, the top 5 batsmen of Team India were successful in hitting sixes in the match against Pakistan during the Champions Trophy. Then in the match played in Birmingham, Rohit Sharma hit 2 sixes during his innings of 91 runs. Apart from them, Shikhar Dhawan hit one, Virat Kohli three, Yuvraj Singh one and Hardik Pandya hit three sixes. In this way, Indian batsmen were able to improve their old record in the third ODI against New Zealand.

IND vs NZ: After receiving the ‘Player of the Series’ award, Shubman Gill said – I do not see the score, I play according to the situation