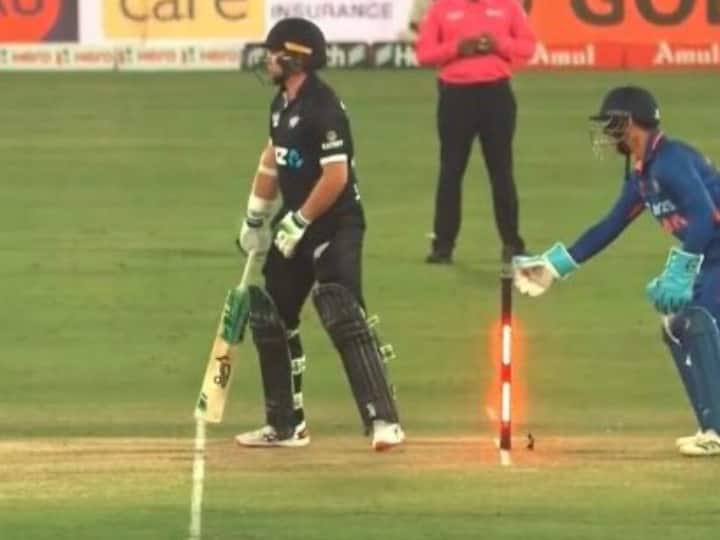 Social Media Viral: India defeated New Zealand by 12 runs in the first ODI. In this way, Team India has gone ahead 1-0 in the 3 ODI series. Shubman Gill scored a double century for India. Team India’s opener scored an inning of 208 runs. In this way, Shubman Gill became the fifth Indian batsman to score a double century in ODI cricket. Earlier Sachin Tendulkar, Virender Sehwag, Rohit Sharma and Ishaan Kishan have done this feat. At the same time, a video of Indian wicket-keeper batsman Ishaan Kishan is becoming increasingly viral on social media.

Ishaan Kishan’s viral video on social media is during New Zealand’s innings. Tom Latham was batting at that time. Actually, Kuldeep Yadav’s ball hit Tom Latham’s pad. After which the surrounding fielders including the bowler appealed, but the umpire did not give out. After this wicketkeeper Ishaan Kishan said something from behind the wicket. Even the commentators did not understand what Ishaan Kishan said, but the fans are liking this style of Ishaan Kishan. This video is becoming increasingly viral on social media. At the same time, the fans are constantly giving their feedback on the video.

On the other hand, talking about this match, India defeated New Zealand by 12 runs. Actually, there was a target of 350 runs in front of Zeeland, but the Kiwi team could score only 337 runs in 49.2 overs. Michael Bracewell played a stormy innings for New Zealand. Michael Bracewell returned after scoring 140 runs off 78 balls. He hit 12 fours and 10 sixes in his innings. Apart from this, Mitchell Santner played an important inning of 57 runs in 45 balls. Earlier, Shubman Gill had scored a double century for India. Shubman Gill returned to the pavilion after scoring 208 runs.

IND vs NZ: Despite the stormy innings of Michael Bracewell, the Kiwi team lost, Indian bowlers reversed the match in the death over